Making “Talking with My Dad:” Dad

Dad is Frankie’s dad, a man who came of age during the Great Depression and fought his way across the Pacific in World War II.

Like much of his generation, he is not a father who could speak easily with his son, especially during the turbulent youth young Frankie had. The two were estranged during Frankie’s teen years and that relationship is locked in time now as Frankie prepares himself for a major life-altering, perhaps life-ending, experience. 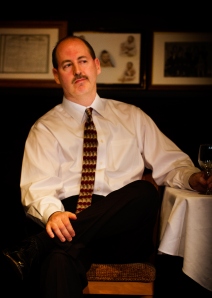 Loren Seidner portrays Dad in “Talking with my Dad.” Here is in in “New Year’s Eve at Grandma’s House.”

The question the audience will be asking itself, though, is whether Dad is actually in this play or not?